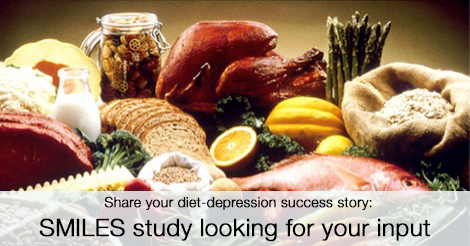 The SMILES RCT, which is the first randomised controlled trial to test whether dietary improvement can actually treat depression, has now been accepted for publication in BMC Medicine (publication date 31st January).

As part of the media campaign, we will be needing to identify people who are willing to be interviewed. If there is anyone who has personally experienced a benefit from improving their diet, would you please volunteer for this purpose?

It’s a very important role, as the media coverage for SMILES will be limited if we can’t provide personal, first-person experiences to journalists. Clearly – for the sake of the field – it will be important to generate extensive media in order for clinicians and the general public to understand the implications and possibilities that arise from the RCT. Your help is enormously appreciated!

You can read more about this SMILES RCT here and the Anxiety Summit interview with Felice Jacka here: The Research – Food to prevent and treat anxiety and depression?.

Although anxiety was looked at in the study, Felice shared this regarding the type of interviewees they are looking for:

If you’ve personally benefited from changing your diet in this way and you’d like to help by sharing your story with the media please comment on the blog (or send an email to support [at] everywomanover29.com) with details of your story and willingness to be interviewed, plus your location. Be sure to let us know how best to contact you.

Right now we’ll just be calling on those who meet the above criteria for the media interviews.

BUT if you’ve benefited from any other changes to your diet – for either anxiety or depression – feel free to share anyway, so we can inspire others to do the same.

Here is my story:

For me it was anxiety and panic attacks that resolved when I made dietary and other nutritional and lifestyle changes.   I had been eating a vegetarian diet for a few years and I suspect the non-organic/GMO processed soy products (soy milk, soy yogurt, soy “butter” etc) were a big issue for me and damaged my gut.  When I added back quality animal protein (grass-fed red meat, wild fish, pastured eggs and chicken), switched to organic produce, added healthy fats and removed gluten my mood improved dramatically.  Now I eat a combination of a Paleo/SCD /low FODMAPS/low oxalate diet.

During the severe anxiety and panic attacks I also needed additional support in the way of the targeted amino acids GABA (this was a life-saver and stopped the panic attacks in a few days) and tryptophan, plus zinc, vitamin B6, evening primrose oil, a good multi and B complex and adrenal support.  I still continue with some of these basic nutrients today.

My health issues have been complex as I’ve also had to deal with heavy metals, poor gut health and much more so I had what I call “a perfect storm” and yet diet has had such a huge impact for me!

Thanks for sharing your story! I’ll be sharing more as soon as the paper is actually published. Stay tuned for an interview with Felice too!

And  big congrats to Felice and her team on this ground-breaking research!

UPDATE January 30, 2017: Here is the link to the research – A randomised controlled trial of dietary improvement for adults with major depression (the ‘SMILES’ trial)