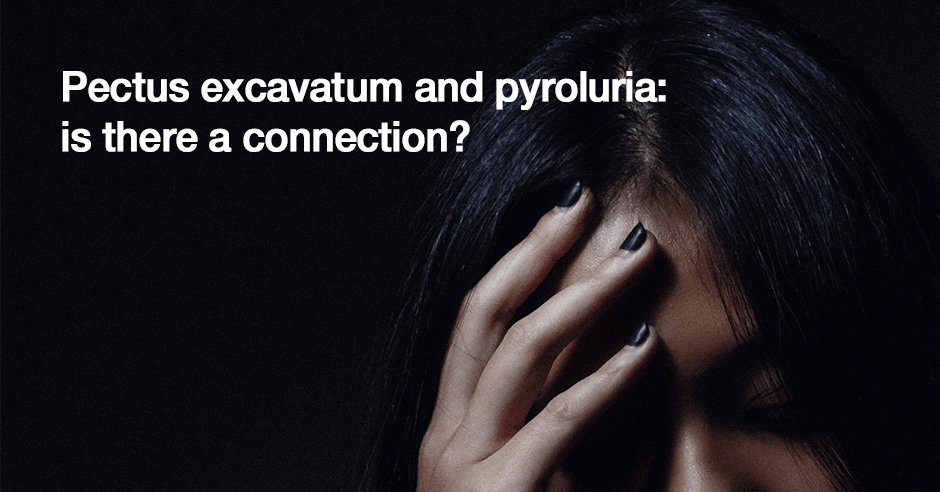 I recently received a question about the possible connection between pectus excavatum and pyroluria, a social anxiety condition. In layman’s terms, pectus excavatum is a depression or indentation in the chest wall and is related to problems with connective tissue. This Medscape article describes it as follows:

Pectus excavatum, also known as sunken or funnel chest, is a congenital chest wall deformity in which several ribs and the sternum grow abnormally, producing a concave, or caved-in, appearance in the anterior chest wall.

It’s not something I’m familiar with other than seeing someone with this condition at the beach once (I share some pictures below) and when doing the research for this blog.

The question was posed in relation to a blog on Joint hypermobility / Ehlers-Danlos Syndrome, a connective tissue disorder that does seem to be common in those with pyroluria.

In case you’re new to pyroluria, it is a genetic condition that is frequently associated with a type of anxiety characterized by social anxiety, avoidance of crowds, a feeling of inner tension, and bouts of depression. People with this problem experience varying degrees of anxiety or fear, often starting in childhood, but they usually manage to cover it up and push through. They tend to build their life around one person, become more of a loner over time, have difficulty handling stress or change, and have heightened anxiety symptoms when under more stress. You can read more about it here.

There are also connective tissue symptoms with pyroluria with the following commonly a factor: joints popping, cracking, or aching; pain or discomfort between the shoulder blades; and/or cartilage problems. This is often due to low levels of zinc. Here is the entire pyroluria questionnaire.

Addressing low levels of the mineral zinc and vitamin B6, together with some other nutrients and stress management, are key to addressing pyroluria symptoms. The social anxiety can typically be lifted in a week and the joint and pain problems often ease in 1 to 2 months.

So now that I’ve set things up with an overview of pyroluria and EDS and the connective tissue problems, let me share what I uncovered about pectus excavatum and why I feel there is very likely a connection with pyroluria.

According to this 2012 paper, Pectus excavatum: history, hypotheses and treatment options

Pectus excavatum (PE) … is the most common chest wall deformity, representing 90% of all cases. Depending on the severity of PE, deviations of thoracic organs and spine deformities are known. Although PE in most instances has little or no influence on the function of the inner organs, the cosmetic appearance of the patients leads to psychological impairment which requires therapy.

In the above paper, they write about one of the hypotheses: weak cartilage through metabolism dysfunction. They report decreased levels of zinc in the pectus excavatum patients, suggesting “the lack of zinc in the diet results in a lower metabolic activity of chondrocytes.” Chondrocytes are cells found in cartilage connective tissue. In summary, one hypothesis is that low dietary zinc affects cartilage connective tissue in some individuals with pectus excavatum.

Observe the mention of psychological impairment. Could the low zinc be playing a role in this too? I address this below.

This paper, Pectus Excavatum and Heritable Disorders of the Connective Tissue, make the connective tissue and Ehlers-Danlos connection:

It seems clear that several patients affected by pectus excavatum display a typical association with connective tissue disorders, which may span from mild form like simple laxity without morbidity associated, to more severe forms such as MFS and Ehlers-Danlos syndrome

This paper also mentions “Highly arched palate with dental crowding” which is common in pyroluria and seems to be related to low levels of zinc.

The image below illustrates a moderate/severe form of pectus excavatum.

Vitamin B6 and high homocysteine

With regards to vitamin B6, one of the other key nutrients needed for pyroluria, one paper, Pectus carinatum repair in an adolescent with hyperhomocysteinaemia: Anaesthetic implications reports a case of a 14-year-old boy with high homocysteine. his level was 18.5 μmol/l (normal levels are within 7–10 μmol/l). He was treated with folic acid, Vitamin B6 and B12 supplements. Is this common in all cases of chest wall deformities? I don’t know but it would interesting to find out.

There are some older studies that report mental health symptoms, including social anxiety are common. In this 1999 paper, Funnel chest. Psychological and psychosomatic aspects in children, youngsters, and young adults, they report these reactions in children older than 11:

It’s understandable that the physical manifestations of this condition would lead to some of these feelings but I have to question how much of this could also be related to low zinc and low vitamin B6. Both nutrients are needed for easing pyroluria/social anxiety symptoms and making neurotransmitters such as serotonin.

Other than trying to make some connections with the research, when this question was asked on facebook, a number of people said they (or a family member) has both pyroluria and pectus excavatum.

If you do have pectus excavatum and pyroluria, getting on the pyroluria protocol will:

I’d love to gather more information and am looking for feedback so please do share your symptoms and experiences in the comments. Let us know if you or your child or other family member has pectus excavatum and any of the following: