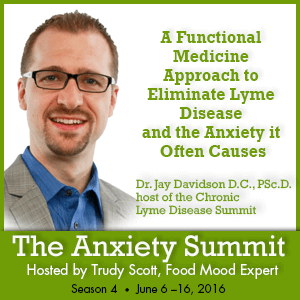 The author describes the histories of three patients with panic-like episodes that turned out to be related to underlying, previously unsuspected tick-borne diseases. Each woman experienced symptoms that are not usual in panic disorder but are typical of neurological Lyme disease, including exquisite sensitivity to light, touch, and sounds, joint pain often in combination with cognitive changes including mental fogginess and loss of recent memory, and some degree of bizarre, shifting, and often excruciating neurological pain. Because these symptoms are atypical of primary panic disorder, they were very helpful in alerting the clinician to suspect an underlying physical illness.

So when you look at anxiety I look at it from an integrative standpoint – like the brain, nervous system has a huge piece in that, the neurotransmitters, and obviously the gut.  So there’s multiple pieces of the body that seem to have a link with it.  But if you have something that’s actually affecting the brain, which is the organ that’s running everything in the body, which Lyme disease or the bacteria borellia is one of those factors I really think that that in itself can cause anxiety – just due to the bacteria.  And what’s interesting about the bacteria of Lyme is it’s not uniform – it can change forms and the main form that it’s known for is called the spirochete where it basically looks like a corkscrew, a spiraling shape.  And so Lyme doesn’t like to just really float around in the bloodstream.  It loves tissues.  It loves joints and that’s where some of the symptoms are, like joint pain, and especially moves around the body. But it loves the brain too and it loves to be in those tissues.

…the standard testing that’s still done today, the ELISA and Western blot, they call it the two tier method.  So if one shows up positive then they’ll run the other one.  That methodology was actually designed and recommended as an observational population method for Lyme.  It was never intended for a clinical diagnosis.  And somehow it became the clinical diagnosis tool that if you run the test and if you come up negative there’s no way you could have Lyme.

Rresearch has shown that 40 to 60 percent of those tests are wrong which means you could almost flip a coin and get a better result.  So you definitely want to find a practitioner that knows Lyme disease, that understands it.

My favorite test right now is from a lab called Pharmasan Labs … a test called iSpot. So instead of B cell antibodies which traditional tests uses it’s using T cells and it’s a lot more accurate.  And studies basically show that this test is not 100 percent by any means either.  But it’s 86 percent sensitive and 94 percent specific. And basically all that means is if you get a positive result on an iSpot Lyme test there’s a six percent chance that it’s wrong.  If you get a negative on the iSpot Lyme test there’s a 16 percent chance that it is  wrong.

Here information on the Chronic Lyme Disease Summit  he hosted earlier this year. It was excellent! 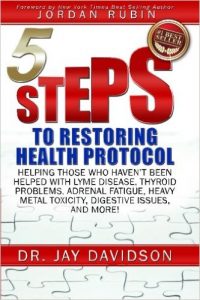 Here are the gifts from Dr. Jay: