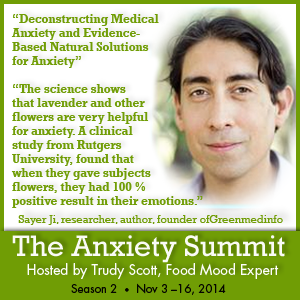 The science shows that lavender and other flowers are very helpful for anxiety. A clinical study from Rutgers University, found that when they gave subjects flowers, they had 100 percent positive result in their emotions.

Lavender has been studied both as an aromatherapeutic agent where you have these small molecules in the volatile fragrance that go right into the olfactory lobe and then start modulating all these different pathways in the brain. Now there are many different ways of looking at this. There’s actually research in the animal model specifically on it being serotonergic, meaning boosting the serotonin levels or preventing their turnover so they last longer, but the reality is there are so many other mechanisms that have been identified. For example, it inhibits what is known as a voltage-dependent calcium channel in a way similar to the drug Pregabalin, also known as Lyrica. And then there’s probably 10 or 20 other different ways in which is likely modulates traditional drug targets in the brain and that’s because the brain is so complex. We’re dealing with hundreds of different biomolecules, many of them classified as neurotransmitters that are making the magic of the chemistry of our brain-produced emotions and feelings so I don’t ever imagine we’ll ever fully understand how it works.

Here is a great blog post from greenmedinfo: Evidence-Based Aromatherapy: Stress Relief And Much More

Here is more information on the Rutgers flowers study, that offered convincing evidence that flowers may be potent mood elevators.  I really love this one!  How did you feel the last time you received flowers?  And when did you last give someone flowers?

I often blog about the joys of nature and getting outdoors and just love this study on forest therapy (also sometimes called forest bathing): Psychological relaxation effect of forest therapy: results of field experiments in 19 forests in Japan involving 228 participants

these results suggest that the forest environments have significant beneficial and relaxing effects on human’s moods compared with the urban environments.

Here is the study that found participants experienced empathy when they smelled the anxiety of another participant: Induction of empathy by the smell of anxiety

You can get access to Sayer Ji’s  Wisdom of Food eCourse here (use code: cureanxiety)