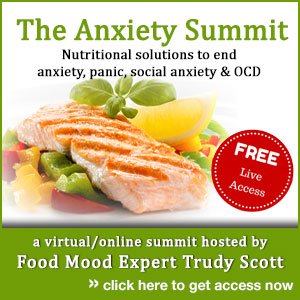 The Anxiety Summit kicks off next week with my introduction addressing: “Stats, trends and gems.” Get ready to hear some shocking trends that we are seeing in mental health!

One of them is: kids with autism are being prescribed benzodiazapines for their anxiety! This is truly shocking and is just one reason why we need nutritional solutions for anxiety, panic, social anxiety and OCD.

We respectfully disagreed on the role of serotonin in anxiety and depression (she doesn’t believe low serotonin plays a role!). Hopefully we’ll be able to convince her one day.

Here is the incredible speaker line up and their topics – for the first week:

UPDATE: the summit concluded on Tues 6/24 – season 2 of The Anxiety Summit will be in November 2014. If you’d like to be on the notification list just sign up here www.theAnxietySummit.com

This is the title of our interview: “Aluminum and glyphosate (Roundup) collaborate to cause anxiety, depression, autism and celiac disease.”

Recently Dr. Seneff has become very concerned about the current autism epidemic and her research leads her to believe that glyphosate plays a critical role in this epidemic as well as in modern diseases like anxiety and depression

During our interview Dr. Seneff shared this:

“There are a group of us who are extremely concerned because the manufacturer of glyphosate has repeatedly claimed that it’s almost harmless to humans. So people are using it very carelessly and they are not monitoring it in their blood, in their urine, in their food or in their water. Everyone is assuming that it’s fine and so it is extremely insidious and dangerous for that reason”

We also talked about how widespread the use of Roundup has been, which is all rather disturbing considering what Dr. Seneff and other researchers are finding.

“Wheat and sugar cane… farmers have been increasingly adopting the practice of spraying these crops right before the harvest (with Roundup)…These are not Roundup ready so the crops dies. And that’s the intention…to hasten the harvest… Nobody thinks it’s toxic…And we have the celiac disease epidemic…and all these gluten free sections showing up in the grocery stores. I think this is directly due to Roundup residue in the wheat.”

The paper ends with this plea:

“We conclude with a plea to governments to reconsider policies regarding the safety of glyphosate residues in foods.”

Join us on The Anxiety Summit to hear the whole interview (and hear 20+ other experts share research, nutritional pearls, food advice and protocols)

UPDATE: the summit concluded on Tues 6/24 – season 2 of The Anxiety Summit will be in November 2014. If you’d like to be on the notification list just sign up here www.theAnxietySummit.com