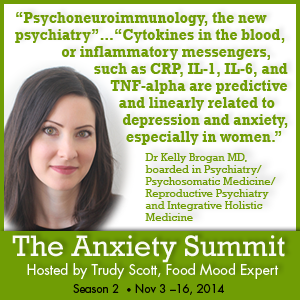 What psychoneuroimmunology refers to is essentially the inherent inter-connectedness between multiple systems. So, it’s about no longer looking at psychiatry as a head up phenomenon, which at best can result in limited outcomes and at worst, can be quite dangerous. And what psychoneuroimmunology implies is that there is a relationship between neurology – so, between brain science – and the immune system. It is sometimes called psychoneuroendocrinology – it also sort of ropes in the gut and the endocrine system with the implication being that you cannot treat one without knowledge about the others. So, I think it’s very exciting and really is a term that embodies functional medicine, or naturopathy at its best.

What many are speaking about is something called the cytokine model, which has been around since 1991, the first paper hypothesizing about this model. So, it’s been a growing literature for some time. And what it refers to is essentially it looks at depression or anxiety, for example, as this non-specific sort of fever that tells us actually very little about what’s causing the body to react, but tells us that there’s is an expression of imbalance and that the body is working to recalibrate. So, there’s some sort of stressor or triggers or assault and the compensatory response on the part of the body is what we are seeing as these psychiatric symptoms.

Cytokines in the blood, or inflammatory messengers, such as CRP, IL-1, IL-6, and TNF-alpha are predictive and linearly related to depression and anxiety, especially in women.

Here is Dr. Brogan’s wonderful blog post on the topic of Psychoneuroimmunology, the new Psychiatry

What is driving this inflammation? How does it get kicked off? And how does it induce depression? With the limited clinical applications and revelations that came with the completion of the Human Genome Project in 2002, we have begun to focus on where we have outsourced our physiologic functions.

The microbiome has become an important consideration, and particularly, the gut, which houses at least 10 times as many human cells as there are in our bodies, and 150 times as many genes as are in our genome. These microbes control many vital operations and are responsible for synthesis of neuroactive and nutritional compounds, for immune modulation, and for inflammatory signaling.

Here is one of the studies on how traditional diets can impact the microbiome: Intestinal microbiota, probiotics and mental health: from Metchnikoff to modern advances: Part II – contemporary contextual research