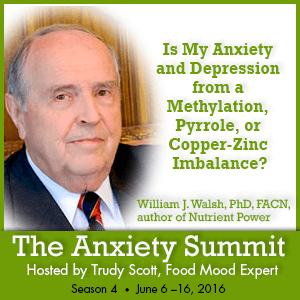 Is My Anxiety and Depression from a Methylation, Pyrrole, or Copper-Zinc Imbalance?

Copper and estrogen are related and I’ve seen probably 400 cases of postpartum depression.  Virtually all of them have a copper overload.  These are people who might have been on SSRI antidepressants and with nothing really happening not making them better or worse.  But if we are able to simply normalize their copper most of them become completely okay and you can throw away their medications. They’re the easiest people to help.

Well with respect to the females if a person has an anxiety disorder or a depression disorder and we find out that the onset was at puberty we kind of expect that the lab results are going to show this is a copper problem because at hormonal events copper levels tend to go awry if you’re not able to regulate your copper.  So it can happen at puberty. It can happen at childbirth.  And it can happen at menopause.  During the nine months of a pregnancy a women’s copper level more than doubles.  And this is necessary for that growing fetus.  It’s necessary for something called angiogenesis to promote the rapid development of blood vessels that that little growing baby needs.  And at the end of a pregnancy a woman’s copper level is usually more than double what it normally is.  A woman normally would be around 100 micrograms per deciliter in her blood.  Maybe it would be 220 at the end of a pregnancy.

Well right after the baby’s born that copper level is supposed to start heading right back down to normal.  Well people with postpartum depression don’t have that ability and this can completely disrupt two of the major neurotransmitters and misery sometimes for the rest of their lives.  But the way we would bring it down, you have to do it carefully because they’re already suffering from too much copper levels in their brain and in their bloodstream so we have to remove the copper gently and gradually.  And one way to do that is to give them small doses of zinc initially and then just gradually build up the doses to the full dose it takes to normalize their zinc which will then automatically get the natural metallothionein system working.  And it takes about six to eight weeks usually.  But it can be done and it can be done without any discomfort for the patient if it’s done slowly.

The takeaway from this discussion is this:

If a person had undermethylated depression they have low serotonin activity.  If you gave these people methylfolate their methylation would improve and the patient would get worse.

So basically I agree completely with Dr. Lynch on the best way to improve methylation and all I’m saying is that for some people, people who have problems of neurotransmission of serotonin you can’t give them folates because they’ll get worse.  So that’s an exception to the general rule.

So it is these people who are the undermethylators (and using the original terminology, those with high histamine or histadelia) that do worse on folate.

Dr. Walsh agreed that the terminology undermethylation and overmethyation is confusing.

Connect with Dr. Walsh and save on his book Nutrient Power: Heal Your Biochemistry, Heal Your Brain (use discount code: ANXIETY) 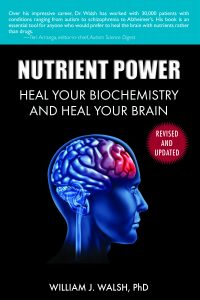 You can find information about the Walsh practitioner training here