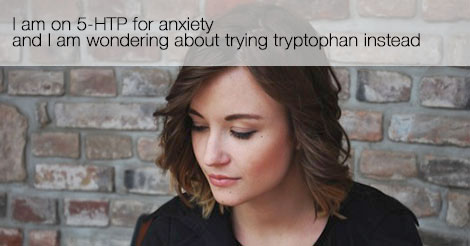 Both 5-HTP and tryptophan help to boost serotonin levels so you can feel happy, calm, sleep well and not crave carbs. I typically have my clients who have low serotonin symptoms start with a trial of tryptophan because it I see such excellent results with this amino acid. That being said, some people simply do better on one versus the other and you may do better with 5-HTP. If you have low serotonin symptoms and are using either of these amino acids and not getting the expected results, it’s worth considering a change.

Here is a question I recently received on the blog. It’s something I’m commonly asked about and something I deal with often when working one-on-one with clients:

I am on 5-HTP (400 mg) [for anxiety]. I am wondering about trying tryptophan instead. What is the best (safest) way to make the switch? What is the starting dose you usually suggest? I am tapering off SSRIs so I know my serotonin reserves are low.

Depending on how severe your symptoms are I would have you slowly replace one with the other, keeping in mind that 50mg 5-HTP is roughly equivalent to 500mg tryptophan.

In this particular case she was taking 400 mg 5-HTP and was surprised to hear that she may now need 2000 mg tryptophan, saying “that seems like a lot!”

Here is my feedback:

2000mg tryptophan isn’t too much if you have low serotonin symptoms and need it. If we were working together I would have her start with a trial of 500mg which is the typical starting amount and increase based on her response. If 500mg helps some symptoms but doesn’t give complete resolution of symptoms then I’d have her try 1000mg and monitor symptoms, and then go up to 1500mg and even 2000mg.

She may respond better to tryptophan and may only need 500mg or 1000mg or she may in fact need the full 2000mg.

She is currently taking an SSRI, so I would assume her doctor already knows she has been using 5-HTP and knows her plans to switch, giving approval and monitoring for possible serotonin syndrome. She would also take the tryptophan at least 6 hours from the SSRI.

Obviously a similar approach could be used to switch from tryptophan to 5-HTP.

I also only ever recommend the Lidtke brand of tryptophan. You can find this and the other amino acids I use with my clients here.

Have you switched from 5-HTP to tryptophan and seen added benefits?

Have you switched from tryptophan to 5-HTP and seen added benefits?

If you’re a practitioner please share if you’ve used this approach successfully.