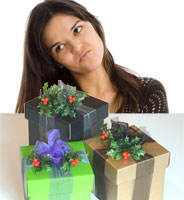 Does this sound like you during the December holidays: Blah? Depressed for no reason? Stressed? Overwhelmed? Anxious? Eating tons of carbs and sugary foods? Perhaps it’s not only the stress of the holidays but is made worse by low serotonin?!

For many of my clients who are prone to having their serotonin levels decline in the winter months, if they don’t the following approaches to raise serotonin they end up with worsening depression and anxiety, and increased afternoon and evening sugar cravings.

So here are some tips to feel great during the holidays:

Check out some great holiday gift ideas to help with all of the above.

I live in the Sacramento area and from November onwards it’s pretty gloomy and grey. I personally feel much better mood-wise during winter when I am out telemark snow-skiing on the weekends – which appears to a combination of the exercise and being out in the bright white snow!