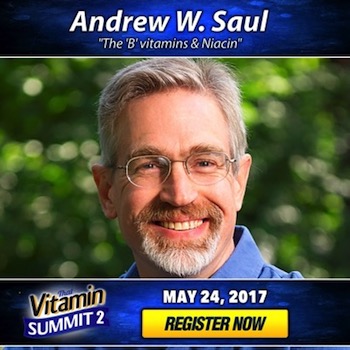 If you have trouble calming down or maybe difficulty sleeping at night, niacin may be worth investigating and trialing. Andrew W. Saul addresses this B vitamin on That Vitamin Summit which starts later this week and runs May 18 – 24 2017. (Note that it starts on a Thursday and not the usual Monday)

He covers the four types of niacin:

Niacin or plain old niacin, niacinamide, a no flush form that works just right for all mental and emotional issues but does not work for cholesterol issues. Inositol hexanicotinate which works well for everything but you have to use more it costs a little more money and it doesn’t work as well and then sustained release niacin which is prescription, expensive and has the most side effects.

Andrew discusses how to experiment and what you can expect in the way of flushing:

First of all you personally can experiment by trying some niacin and seeing how you feel. An example of this would be a healthy person who has a little trouble calming down maybe difficulty sleeping at night. Maybe they’re a little more anxious than they think they should be and perhaps taking some niacin would be a good thing to try. You could open up with 500 milligrams of niacin, breakfast lunch and dinner.

Andrew does share what he calls “my wimpy way of taking niacin” where you slowly but surely increase from a low dose to avoid the flush.

He laughs about how Dr. Abram Hoffer was so fond of using niacin that he would tell people look just tough it out: “Tolerate the flush, it’s going to take a couple of weeks.”

And he also shares that Dr. Hoffer was his mentor and how Dr. Hoffer saw dramatic results with schizophrenia patients:

Now Dr. Abram Hoffer the world’s expert on niacin who started studying niacin in the early 1950’s and he was my personal mentor many decades later. Dr. Hoffer was a psychiatrist, a PhD as well as an MD and he treated over five thousand patients with niacin in his medical career.

It’s a fascinating interview and the most detailed one I’ve yet to hear on the topic of niacin. It’s not to be missed!

He goes on to cover the following

I hope you can join us on That Vitamin Summit brought to you by makers of That Vitamin Movie which has been watched online by over one million people since its release in January 2016.

There are over 80 years of documented evidence that show how humble vitamins, minerals and other nutrients (such as amino acids – the topic of my interview) can prevent, and even cure major diseases like diabetes, arthritis heart disease and anxiety and depression. That Vitamin Summit 2 has assembled over 20 top experts to show YOU how to use these nutrients to increase your health and well-being almost immediately.