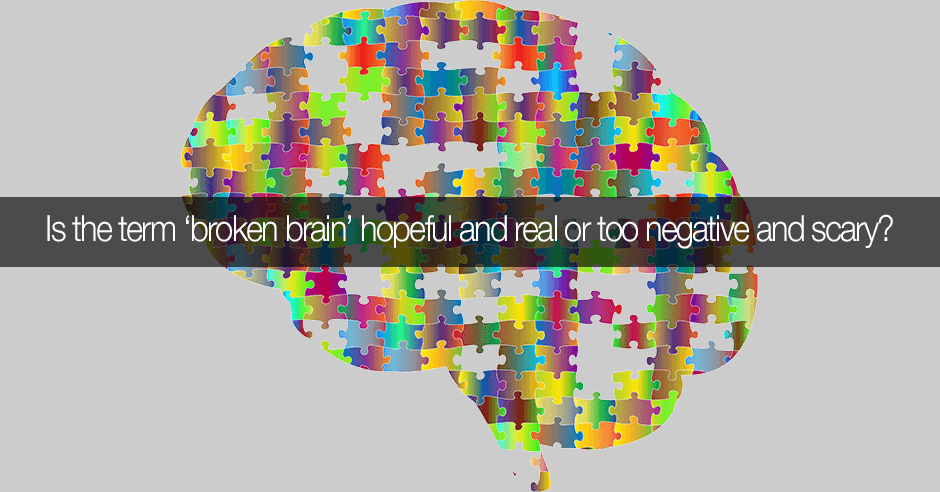 If you experience anxiety, panic attacks, depression, memory or cognitive issues, ADHD or poor focus and someone suggests you may be suffering from a broken brain are you intrigued and hopeful that something that is broken can now be fixed OR do you consider the term broken brain too negative and scary?

I received this feedback from someone in my community when I shared my recent Broken Brain interview with Dr. Mark Hyman:

I’m looking forward to seeing the [Broken Brain] documentaries however I dislike the title. Everything that you say and think is affecting your brain. For me Broken is not a word with healing potencies but suggests that is something very bad happening in the brain. And maybe that is the case, but how we interpret our symptoms is very crucial for healing. In my opinion it could be Healing the Brain or something like that. I think is very important that the title implies positivity not fear!

I shared this feedback with her: “Thanks for sharing – you’re the 4th person in a day to say this. Prior to your feedback and hearing from 3 mental health colleagues earlier today I had not considered the name would invoke negativity and fear. One of my mental health colleagues shared with me that “referring to people as ‘broken’ is really stigmatizing and inappropriate.”

My thinking is that just like a leg is broken, the brain can be broken and can just as easily be fixed when we address the root causes. I’ve also watched the series (during the test run late last year) and have seen the wisdom, caring and compassion of the experts and Dr. Hyman, as well as the solutions and message of hope. I suspect that has swayed my opinion too. But I do see your point on being positive and solution-oriented without the fear aspect.”

What do you think?

It’s important that I serve my community well – and that’s you! If something concerns you I want to know so I can address it.  I also want you to know that I’m offering solutions hope and not wanting to create fear and negativity, so I posed this question on Facebook (together with the above feedback from the blog):

I’d love to hear your thoughts on the title of Dr. Hyman’s new Broken Brain docu-series?

What do you think? Good title? Bad title? And why?

The majority of responses were positive feedback. Here are many of them:

Three mental health professionals felt the term broken brain was stigmatizing but other than this, surprisingly few people had negative feedback. A few people resonated with words like repair or mend instead of broken, saying most people think of broken as worthless and negative, and can’t be fixed. One mom felt it was insensitive to the real struggles of depression and anxiety. Here are a few specific comments:

If you don’t like the term broken brain, I’m hoping you will get some inspiration and feel some level of comfort from the positive comments above and watch it anyway. You will see there are solutions, compassion and hope!

Also, many of my clients who use words like “negative, worthless, scary and fear”, do feel better when we look into low serotonin and address low levels with tryptophan or 5-HTP. Also, addressing gluten issues, poor gut health, low GABA, low zinc and so on – everything body-related that can affect the mind and brain. All of this is covered in the docuseries, other then the use of targeted amino acids, which I cover extensively in my book The Antianxiety Food Solution, in my newsletters and elsewhere on this blog.

An apology: integrity, compassion and hope

I really want to hear your thoughts but also want to offer Dr. Hyman’s apology if you are offended by the term broken brain. As soon as his team started getting feedback they issued this statement on his behalf:

Thank you for your comment. We completely understand what you are saying and we agree. So much of this docuseries is about Dr. Hyman’s personal health crisis and how he treated his own brain disorder. During this time Dr. Hyman felt like he had a broken brain. This is why we decided to call the title Broken Brain because the foundation of the series is about his personal journey. However, we do not think that everyone who is dealing with a brain disorder or a developmental disorder has a broken brain. We know that all individuals, including those with brain conditions, are fully complete people, each with their unique spirit. We hope that you’ll watch the series and understand that more than anything it’s about hope and about moving toward our best health!

I find this very thoughtful and it clearly reflects the level of his integrity and compassion.

In case you’re just hearing about the Broken Brain for the first time, here is the link to register for this 8-part docuseries and my highlights video interview with Dr. Hyman (together with the transcript)

(With appreciation if you already provided feedback and for giving me permission to share it here. This is a good discussion to have!)