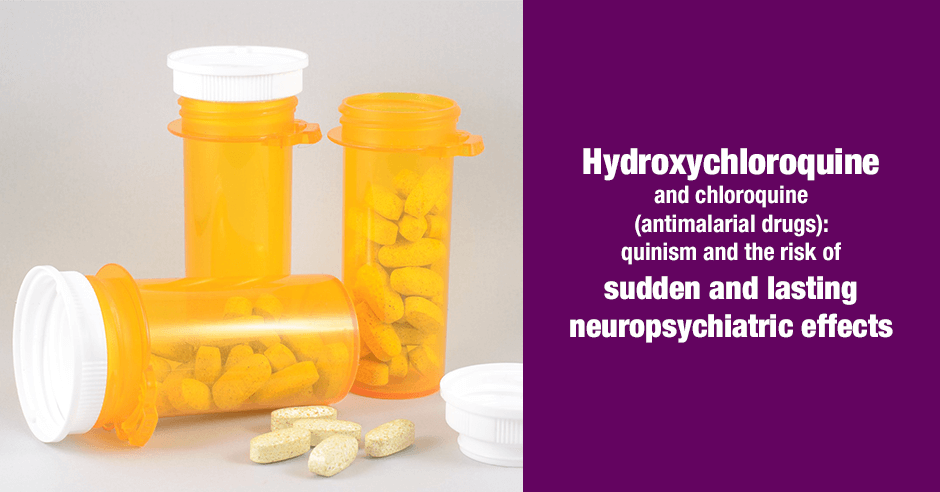 The Quinism Foundation, a nonprofit charitable organization “promotes and supports education and research on quinism, the family of medical disorders caused by poisoning by mefloquine, tafenoquine, chloroquine, and related quinoline drugs.”

These symptoms are not “side effects,” they are symptoms of poisoning by a class of drug that is neurotoxic and that injures the brain and brainstem. This poisoning causes a disease, and this disease has a name: Chronic quinoline encephalopathy — also known as quinism.

In March they published this press release: The Quinism Foundation Warns of Dangers from Use of Antimalarial Quinolines Against COVID‑19. Here are some highlights:

What is concerning is lasting neuropsychiatric effects and the fact that even low doses can cause irreversible effects. The Foundation “has urged policy makers, physicians, and members of the public to be alert to such effects.”

Dr. Nevin states that “these are not safe drugs” and “While it may be tempting to attribute anxiety, depression, paranoia, or other mental health symptoms to the psychological effects of the COVID‑19 pandemic, these symptoms may be an early warning sign of idiosyncratic neurotoxicity, and must be taken seriously.”

You can read the entire March 2020 press release here. It contains a link to U.S. Food and Drug Administration’s MedWatch program for reporting adverse effects.

Another press release published late July also cautions the use of tafenoquine against COVID-19 which The Qunism Foundation states “is a neurotoxic quinoline antimalarial drug with a similar adverse effect profile to mefloquine.”

It’s encouraging to see that new research published on COVID-19 and these medications also highlights the possibility of neuropsychiatric side effects (even through the authors state it’s considered uncommon): Psychiatric Aspects of Chloroquine and Hydroxychloroquine Treatment in the Wake of COVID-19: Psychopharmacological Interactions and Neuropsychiatric Sequelae

Here is one of these case reports: Psychiatric symptoms induced by hydroxychloroquine.  A 36-year-old woman was diagnosed with Systemic Lupus Erythematosus (SLE) and antiphospholipid syndrome, and was treated with prednisone 10 mg and hydroxychloroquine 200 mg every 24 hours. Her arthritis improved but

One month after initiation of treatment, the patient began with generalized anxiety, suicidal ideation and the appearance of auditory and kinaesthetic [tactile] hallucinations.

A week later, the patient was admitted to the Department of Psychiatry because of suicidal ideation, self-harm and kinaesthetic and auditory hallucinations, which improved after withdrawal of hydroxychloroquine and treatment in a psychiatric setting.

Since then, the patient has not been taking hydroxychloroquine and has had no further episodes of kinaesthetic [tactile] or auditory hallucinations.

This review article from 2018, Neuropsychiatric clinical manifestations in elderly patients treated with hydroxychloroquine: A review article mentions that these adverse events can range from less severe nervousness to “actual psychosis and suicidal tendencies.”

co-exposure to interacting drugs, alcohol intake, familial history of psychiatric diseases, female gender, and the concomitant use of low-dose glucocorticoids [such as prednisone].

I first learned of this neuropsychiatric connection a number of years ago when I read about the “case of a service member diagnosed with post-traumatic stress disorder but found instead to have brain damage caused by a malaria drug.” You can read about this here – Malaria drug causes brain damage that mimics PTSD: case study.

A few years ago I also blogged about the anti-malaria medication mefloquine and how it was known to contribute to neuropsychiatric symptoms in susceptible individuals: PTSD from 3 tours in Afghanistan: Can GABA help with the anxiety?

My concerns about long-term prophylactic use and lack of awareness

My concerns are long-term prophylactic use. There are a number of clinical trials planned or in progress for long-term use in healthcare workers. If they are stressed, anxious, depressed and exhausted because of the COVID-19 work they have been doing, they may incorrectly attribute some of their symptoms to all that rather than the medication side-effects. And if they do get COVID-19, they may confuse the neurological and psychiatric effects of COVID-19 with those of chloroquine or hydroxychloroquine.

What also concerns me is the lack of awareness. None of the advocates of this class of medications mentions quinism, the possible neuropsychiatric side-effects and long-term risks, or who may be susceptible.

I would be very happy if chloroquine or hydroxychloroquine is found to be a solution (or part of a solution) for COVID-19 – alone or in combination with zinc – for certain individuals.

But I believe we do need to be very aware about side-effects as serious as these. I’d also like to see education for healthcare providers and the consumer, as well as informed consent for the consumer.

Similar concerns with other medications

In the past I’ve written about similar concerns with other medications such as benzodiazepines, SSRIs and fluoroquinolone antibiotics:

Your feedback and questions so we can all learn

I encourage you to keep all this in mind as you navigate what you hear in the news, read on social media and/or read in the research on hydroxychloroquine.

Keep all this in mind too if you have future plans to travel to a malaria area for a vacation in the future (wouldn’t we love that – a trip!?).

Have you used chloroquine or hydroxychloroquine for COVID-19 and experienced psychiatric side-effects? Or know someone who has?

Have you used antimalarial medications in the past and experienced psychiatric side-effects? Was this a short-course or long-term prophylactic use?

Have you used these medications for lupus or rheumatoid arthritis with success and without psychiatric side-effects? Or have you experienced adverse effects and had to stop?

If you have had adverse psychiatric effects please share which medication, dosage and frequency? Also do you have any of the predisposing risk factors: alcohol intake at the time, history of psychiatric diseases (you or family members), are female, and were also prescribed low-dose glucocorticoids such as prednisone, and/or other medications (and which ones)?