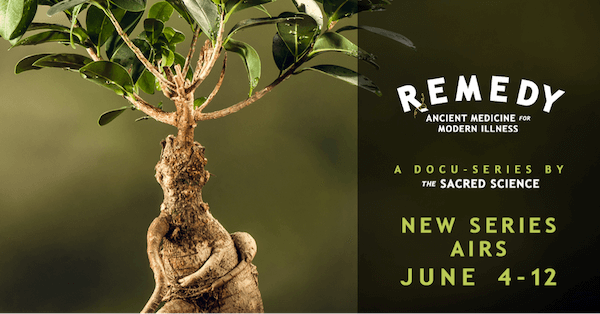 Producer, director and author Nick Pollizi and his team brought you the groundbreaking documentary The Sacred Science.

They are now bringing you Remedy: Ancient Medicines for Modern Illness, a new, nine-part online docuseries exploring the world’s most promising medicinal herbs and how they are being used to treat today’s most life-threatening illnesses, including cancer, heart disease, Parkinson’s, Lyme disease, physical pain, depression, stress and anxiety, dementia, chronic fatigue, migraine headaches, insomnia and many others.

It features some of the biggest names in herbalism and natural health, as well as some amazing healing stories from real people who have recovered from serious conditions and illnesses using plants. It’s compelling, timely and better than anything they’ve done in the past.

Here are some snippets from Tieraona Low Dog, a physician and a teacher and a herbalist, in Episode 6 – Healthy Hearts and Happy Minds: Solving Cardiovascular Disease and Depression. She is talking about “The INTERHEART Study.”

It was twenty-seven countries, fifty-thousand people, or so. It was a huge study. And they found that, in women, that being, feeling socially isolated—feeling lonely, was more predictive of having a heart attack than being obese, smoking, being diabetic, or having hypertension.

When I would have med students, I’d say, “Did you ask them how many friends they have, about their relationship with their families? Do they feel lonely?” The med students were all like, “Dr. Low Dog, how are you supposed to ask that?” Because nobody wants to ask it because they don’t know what to do if somebody says, “Yes, I’m lonely,” because physicians feel like they have to fix everything, and you don’t have to fix everything. You just have to come alongside people, and, sometimes, it’s just the asking of the question, “Are you lonely,” that can open up somebody’s heart to be able to talk about how they’re feeling—especially if they are.

So heart disease is a complex mixture of genetics and environment and diet and activity and not managing our stress and loneliness because, why do you say, “It broke my heart,” instead of like, “It broke my liver.” True. It broke my heart. There’s this deep sense that we’ve known for a long time, that’s reflected in our language, that our heart is the seat of our emotional health and our emotional wellbeing, and when we’re “heartbroken,” it breaks the heart. It’s true.

She goes on to share some herbal heart information too… Hawthorn is a classic example of a tonic for the heart:

The old monks in the old days used to take hawthorn, and they’d make them into syrups and liquors and things and give them to old people to strengthen their heart. Today, we know through a tremendous amount of science on hawthorn. Yes, it actually does help the aging heart. It helps it beat more efficiently, use its blood and oxygen more efficiently, makes it less likely to have arrhythmias. It’s a tonifying herb for the heart.

You can register here.