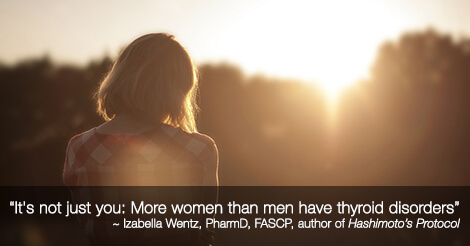 If you’ve ever wondered why more women than men seem to have autoimmune disorders, you’re not alone—I repeatedly get asked this question by people (mostly women!) who come to me seeking help with a thyroid disorder.

Even if you have had a hunch that more women than men are affected by autoimmune diseases such as lupus, rheumatoid arthritis, and multiple sclerosis, you’ll be surprised by this statistic: women account for a whopping 78% of all cases of autoimmune disease.

Hashimoto’s thyroiditis, which I was diagnosed with at 27, is five to eight times more common in women. (I’ve since gotten myself into remission and have dedicated my life to helping others heal from this condition.)

These disproportionate figures have perplexed experts for some time. After years of research and time spent working with people with thyroid disorders, I have formed my own theory, which I call the Izabella Wentz Safety Theory. I can’t wait to share it with you—but first, I’ll tell you a little about some of the other influences autoimmunity.

Searching for an Explanation

When we consider why more women than men have Hashimoto’s and other diseases of autoimmunity, we have to consider two key differences between men and women: hormones and a propensity to use more personal care products.

Regarding the first, there’s no denying that hormones could play a major role in autoimmunity developing. Three of the most likely times for the onset of thyroid disease are during and around puberty, pregnancy, and perimenopause.

Sex hormones such as estrogen and prolactin help regulate the immune system and fluctuations in these could contribute to thyroid disorders especially. Estrogen can alter the requirements for thyroid hormone, which could result in an autoimmune condition, especially if nutrient deficiencies are present. Prolactin, a hormone released by the pituitary gland in women after childbirth, can become elevated in women with Hashimoto’s (even in those not postpartum) and has been linked to increased thyroid antibodies and infertility.

Women do have a higher risk of developing diseases of the thyroid after they’ve given birth. But theories, such as “fetal microchimerism” which suggests that the presence of fetal cells in a woman’s thyroid gland after childbirth could be the spark of an immune system response, haven’t proven to be true.

All this is to say that at present, there isn’t enough information to support the idea that hormones alone are to blame for the higher rates of autoimmunity in women.

I haven’t seen enough evidence to convince me of this explanation either.

In truth, I think the answer is much more complicated and requires us to consider some of the underlying vulnerabilities that often occur in people with Hashimoto’s.

Unsafe Conditions Ahead: Go Back to Bed!

After working with thousands of people with Hashimoto’s, I’ve found that there are some common co-occurring factors. Many have nutrient depletions, intestinal permeability, food sensitivities, an impaired stress response, an impaired ability to get rid of toxins, and infections.

The more I thought about these factors, the more I realized that they have something in common: they all send a message to our bodies that the environment isn’t entirely safe and maybe self-preservation mode is what’s best for now. This provided the basis for my Safety Theory.

Women are responsible for bringing new life into the world. And with this job comes a more finely tuned ability to sense the safety of the environment. We may be more inclined to sense that it’s not be the best time to reproduce—this could be because resources are scarce and we need to focus on our own survival, or for some other protective reason.

In either case, it’s a result of an evolutionary adaptation, or what’s known as adaptive physiology.

When we were cavewomen, one of the main sources of stress was food scarcity—we didn’t always know when we were getting our next meal. When we didn’t eat, consumed things that we weren’t intended to digest, or developed nutrient deficiencies, our bodies would conserve resources and reduce calorie burning.

Strangely enough, even though these scenarios first occurred hundreds of thousands of years ago, there are aspects of modern living that are replicating these signals: we go on calorie-restricted diets (signals food scarcity), eat a highly processed diet (creates nutrient deficiencies), and try to eat foods we’re not intended to digest, such as gluten (leads to digestive difficulties/intestinal permeability).

And when these vulnerabilities are present, they set the stage for an attack on the thyroid to take place and for some of the symptoms of self-preservation to develop. As thyroid function is disrupted, metabolism is slowed and you are sent into a quasi-hibernation mode.

Your body is signaling to you to conserve energy, hold onto weight, making you feel cold and tired all the time so you stay in your cave (or your bed), and lowering your interest in reproduction (low libido) until the environment is safe and fertile once again.

Other Environmental Threats Women Face and How the Thyroid Responds

Did you know that your thyroid gland can sense danger and initiate the autoimmune response? I think in this ability lies another possible clue as to why more women than men develop thyroid disorders.

It’s no secret that the world we live in is not as safe for a woman as it is for a man. Women are more likely to be abused, physically, emotionally, and sexually. And abuse is one of the most undeniable messages to our bodies that we are not safe. The function of the perceptive and sensitive thyroid is put at risk when this is the case.

This is part of my Safety Theory, but it’s not just a theory—multiple studies have confirmed that thyroid hormone imbalances occur in people who have been abused:

The abuse doesn’t have to be physical to trigger a red alert in the body. Many girls and women today experience emotional abuse or trauma that can make us feel isolated and cue up a flight response. This can happen at school or in adult social circles, where if we can’t keep up the appearance of being a Superwoman, we might get edged out of the tribe.

In working with so many women with Hashimoto’s over the years, I’ve learned so much about the condition and the vulnerabilities that can lead to its development. And I’ve also learned about some of the most effective strategies and approaches to healing.

One of the most moving revelations was that a message of safety is so important to helping women through recovery. I’m referring to comprehensive self-care, which can include internal mantras and the right kind of exercise and pampering that help create a restorative environment.

But it should be more than that.

What I’ve found is vital is addressing the vulnerabilities head-on—the signals your body is sending to conserve need to be shut off. You must repair your internal ability to respond to stress and restore detoxifying and digestive functions, eliminate food sensitivities and infections, and replenish nutrients that are lacking.

I’ve spent years creating and refining protocols that help women (and men) accomplish these goals. And I’ve finally been able to collect and present them together in one place in one program in my new book Hashimoto’s Protocol: A 90-Day Plan for Reversing Thyroid Symptoms and Getting Your Life Back.

When you follow the protocols I outline there, you send safety signals to your body by reducing your toxic burden, supporting your stress response, and supporting your gut with nutrition and targeted supplements. You communicate in a concrete way that the environment is stable and safe, and your thyroid can get back to its important work of helping you feel energized and warm, calm and clear headed.

I have dedicated my life’s work to helping women heal from Hashimoto’s so that they might feel safe, supported, and active in their lives again. I hope you’ll check out Hashimoto’s Protocol to see if might help you or a loved one recover from a thyroid disorder.

Until then, I encourage you to start sending safety signals today. Start by being nice to your body—feed it nutritious foods when it’s hungry and don’t skip meals. Don’t subject it to excessive or unnecessary stress, which means make time for play and rest. Stop forcing it to push through exhaustion by piling on the caffeine—rest! Listen to your digestion; if there are signs that a food is not working for you, don’t double up on antacids, but instead adjust.

Listen to your body and care for it like a child, or any other loved one who you would treat with absolute care. Like someone you’d want to make sure feels safe.