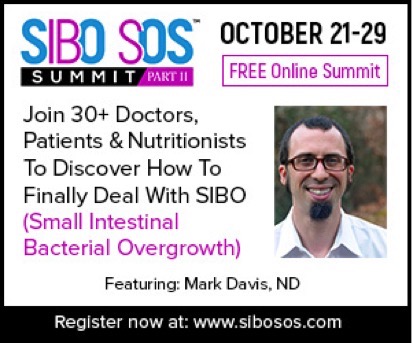 Mark Davis covers fecal microbiota transplants and helminth therapy on the SIBO SOS Summit part II. The title of his interview is: No Holds Bar Conversation About Fecal Transplants (yup, we go there) From a Fearless Expert. You will discover:

My understanding of Dr. Pimentel’s hypothesis is that SIBO is really autoimmune enteritis. It’s your own body’s immune system launching antibodies either against cytolethal distending toxin B (CDT) or against vinculin in the gut. That’s an autoimmune process.

What these microscopic worm-like organisms, helminths, do for us is they invoke a robust T-regulatory cell response. T-regs are responsible for telling the rest of the immune system when to calm down.

If you’ve ever looked at the great book, Epidemic of Absence, the premise of the book is how absence of exposure to microbes, including helminths—your ancestors were exposed to them over and over again—absence to all that might be causing an epidemic of allergic and autoimmune disease today.

He also shares that his favorite helminth is one called Necator Americanus.

That’s the new world human hookworm. I have about 30 of them living in my gut right now. I’ve worked with dozens of patients using these.

Mark also shares what fecal microbiota transplantation is and how it is delivered:

taking the microorganisms that are alive in stool, which you have tens of trillions of them in and on you right now, and it is filtering and processing those in a way to isolate the important parts, as much as you can, and then delivering those to the gastrointestinal tract of somebody with a dysbiotic gut flora. That can be via capsule or upper endoscopy or via lower endoscopy or enema. Those are the most common ways to deliver it.

He goes on to share how effective a FMT is for a C. diff infection (when nothing else works, the FDA rulings about it only being allowed for C. diff or as part of a study, and how he is guiding his ulcerative colitis and Crohn’s disease patients through a DIY version.

I love this comment from Mark when we he is asked about the ick factor of working with poop:

It doesn’t feel like I’m processing poop. It feels like I’m mixing up a magic brew to help my patients.

Here is some background on Mark Davis, ND: He practices at the IBD Specialty Center in Silver Spring, Maryland, and once per quarter at Bright Medicine Clinic in Portland, Oregon. He specializes in natural gastroenterology, especially the care of adults and children with inflammatory bowel disease. He is one of the few clinicians in North America with significant clinical experience using fecal microbiota transplantation (or FMT) as a therapeutic intervention, and has written and lectured extensively about FMT and helminthic therapy. He sits on the board of directors of the Fecal Transplant Foundation, and serves on the editorial board of the Natural Medicine Journal.

Mark is one of the speakers on the SIBO SOS Summit Part II. SIBO (Small Intestinal Bacterial Overgrowth) is a leading cause of IBS (irritable bowel syndrome). The most common SIBO symptoms are digestive issues, pain and bloating, and there are many other complications such as leaky gut and yeast overgrowth that make it difficult to diagnose and treat SIBO. Anxiety, depression and insomnia are common symptoms too.

FMT is not actually for used for treating small intestinal bacterial overgrowth (SIBO) and Mark shares this caution for about 5% of SIBO sufferers:

When you’re delivering [FMT] via capsules or upper endoscopy, some or all of them may end up in the small bowel. Ninety-five percent or more of the time, that ends up not being a problem, but if people already have impaired motility in the small bowel or an existing autoimmune process, or an existing small intestinal bacterial overgrowth (SIBO), that can compound the problem. 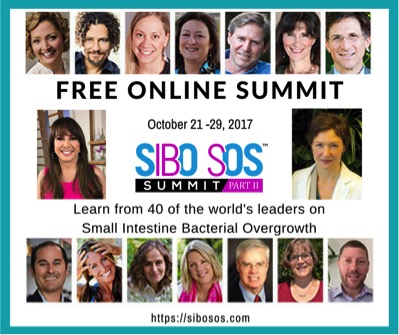 Part II of the SIBO SOS is all new interviews and is a great resource. Here are just a few of the guests and topics: