Just a quick reminder that “Betrayal – the Autoimmune Disease Solution They’re Not Telling You” Episode 6 and 7 are coming up. This docu-series is hosted by Dr. Tom O’Bryan, author of the bestselling new book The Autoimmune Fix. 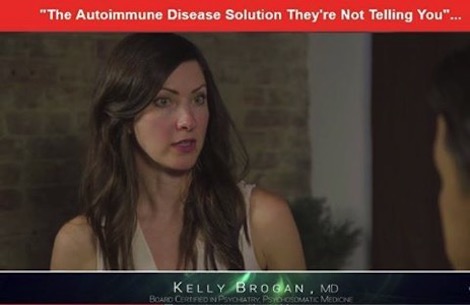 I was diagnosed with Hashimoto’s postpartum about nine months after my first pregnancy and had never had a health condition in my life. I’ve been living really, largely recklessly from a health perspective, literally eating McDonald’s, drinking Red Bull, and eating candy every day, and never exercised. As a resident, never sleeping. Not only never sleeping, but then I would go out clubbing several nights a week.

It was through simple changes going, gluten and dairy-free, taking a number of antioxidants, vitamins, and minerals, for example, and then beginning to recommit to exercise that I watched my numbers go from the high 2000s and turning the antibodies to the normal range in a period of months. I watched my TSH go from 20 to normal in that same time frame.

So powerful! wow! I so often see these kinds of results in my clients

This is the response from Dr. Masley:

Neurodegeneration, yes. I see that too because when we do gluten testing, I’ll see that many people, especially if they have anxiety or depression or really bad cognitive dysfunction, they have the antibodies light up on the test that are specific for brain antibodies [that would be transglutaminase 6]

They both share how by applying lifestyle principles it takes just a couple of weeks to a month for people start seeing changes.

I’d like to add my contribution to the discussion because it’s a question I hear all the time and it wasn’t addressed in the docu-series:

How do you use endorphin-boosting DPA with gluten and casein withdrawals? And do you use anything else for the addictive component of these gluteomorphins and caseomorphins?

As always I would say do the amino questionnaire, and tell me how much you LOVE bread or cookies whatever it is, and how sad you’ll be to give it up (from 1-10, with 10 being the worst i.e. devastated).

Do a trial chewing a DPA / Endorphigen or opening it on to the tongue and decide how many notches it improved. If it’s working you should be able to say

You would then take 1-3 of 500mg DPA between meals and as needed at other times when you feel the need for comfort or a reward or treat.  A free form amino with tryptophan helps boost endorphins too and makes the DPA more effective.

If you score high in other sections of the amino acid questionnaire you would do the same with each amino acid – maybe you also eat bread/cheese to destress (then it’s GABA) or to feel happy (then it’s tryptophan) or for blood sugar control (then it’s glutamine) or for energy (then it’s tyrosine).

The amino acids, when used in a targeted way like this, make it easy to quit so no willpower is required and you don’t feel deprived.

Coming up there are these final episodes:

Nov 19th: Episode 6- Autoimmune Diseases of the Brain: A New Approach to Neurology
Nov 20th: Episode 7- Case Studies: Bringing it All Together

UPDATE: The event is now over but you can check out Episode 1 here