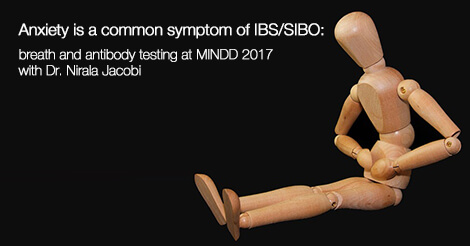 I attended Dr. Nirala Jacobi’s presentation on at MINDD 2017 practitioner training and here are some highlights from her presentation on SIBO (small intestine bacterial overgrowth) which is the leading cause of IBS and a major cause of leaky gut syndrome. It is the presence of an overgrowth of beneficial bacteria in the small intestine i.e. good bacteria in the wrong place. 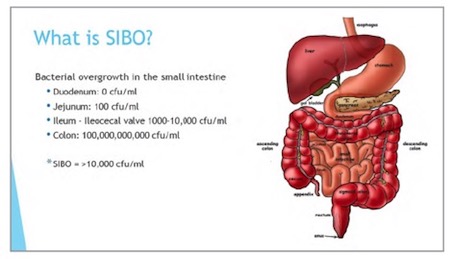 Bacterial overgrowth has also been implicated in a host of other conditions such as developmental delay, fibromyalgia, interstitial cystitis, malabsorption syndromes and many more [such as anxiety and depression and even insomnia]. SIBO requires a methodical approach to testing and treatment in order to successfully re-establish a healthy digestive tract.

And some of the typical symptoms SIBO patients experience: 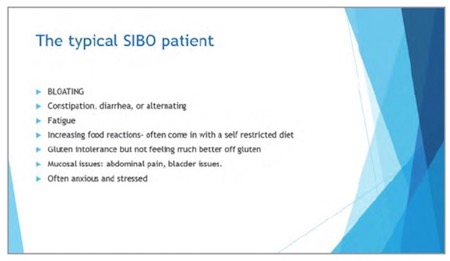 I was not familiar with all these prior surgical procedures being a possible cause but this makes sense. I’ve added gastric bypass, appendix removal, endometrial surgeries, C-section and gallbladder removal (cholecystectomy) to my SIBO questionnaire. 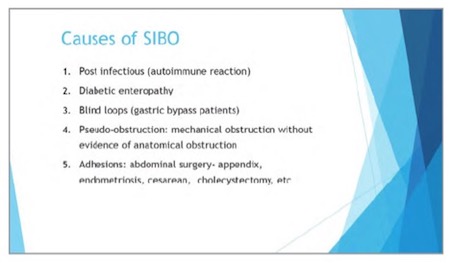 Other possible causes include certain medications, stress and anxiety (which affects how much HCl or stomach acid you produce and gut motility) and overconsumption of simple carbohydrates. 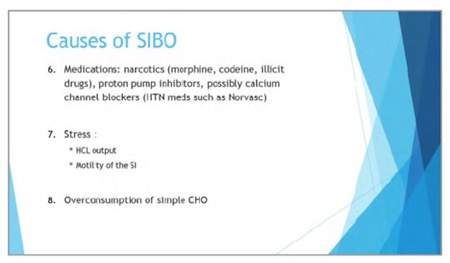 Going back to the #1 possible cause i.e. post-infectious due to a stomach bug, the gastroenteritis and autoimmunity connection was presented. Bacteria which cause food poisoning produce a toxin called CdtB which is similar to human vinculin which is important for nerve function. 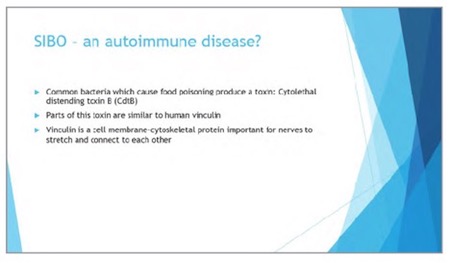 Due to the similarity between CdtB and vinculin, the body produces anti-vinculin and anti- CdtB antibodies which lead to an auto-immune attack on the enteric nervous system. This causes damage to the MMC/migrating motor complex and contributes to SIBO. 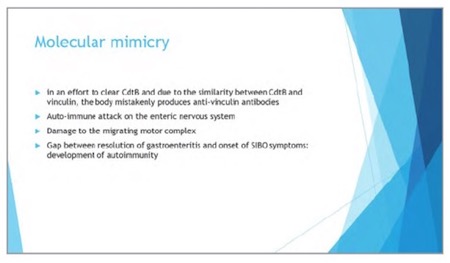 A press release from Cedars-Sinai and Dr. Pimental: Definitive Tests for Irritable Bowel Syndrome Developed at Cedars-Sinai announce the multicenter study validating the accuracy of the new blood tests:

Dr. Pimentel and fellow researchers studied nearly 3,000 people, comparing IBS patients to those diagnosed with inflammatory bowel disease, celiac disease and those with no GI disease. The blood tests identified the two antibodies associated with IBS – anti-Cdtb and anti-vinculin – with greater than 90 percent certainty.

The tests are marketed under the name IBSchek™ and are produced by Commonwealth Laboratories Inc., in Salem, Massachusetts.

This paper reports this autoimmunity connection: Autoimmunity Links Vinculin to the Pathophysiology of Chronic Functional Bowel Changes Following Campylobacter jejuni Infection in a Rat Model and this paper discusses the two tests: Development and Validation of a Biomarker for Diarrhea-Predominant Irritable Bowel Syndrome in Human Subjects

These blood tests are available in the USA but are not yet available in Australia where Dr. Nirala Jacobi now lives and practices.

Dr. Nirala Jacobi, BHSc, ND (USA) graduated from Bastyr University in 1998 with a doctorate in naturopathic medicine. She practiced as a primary care physician in Montana for 7 years before arriving in Australia. Nirala is considered one of Australia’s leading experts in the natural treatment of small intestine bacterial overgrowth (SIBO), a common cause of IBS. In 2014, she designed the SIBO Bi-Phasic Diet to aid practitioners in simplifying their treatment approach with their SIBO patients. She is the Chief Medical Officer and Director of SIBOtest.com, an online breath testing service and educational portal for practitioners. She frequently lectures to national and international professional audiences on the topic of SIBO and founded the first Australian SIBO Summit in 2016 Nirala has had a busy private practice in Brisbane since 2008 and recently moved her clinic to Wilsons Creek in the beautiful northern rivers region of NSW, Australia.

For SIBO breath testing services in all countries check out the testing page on Dr. Siebecker’s SIBOinfo site

Keep in mind that most SIBO studies are on IBS. According to Dr. Siebecker

Drs. Pimentel and Lin originated the theory that SIBO is the underlying cause of IBS.  As with all theories, there is debate and controversy about this idea, with many who agree and many who do not.  One thing is certainly clear, the symptoms of SIBO overlap with those of IBS and a large percentage of IBS sufferers test positive for SIBO.  One study by Dr Pimentel and team, showed SIBO in up to 84% of IBS patients, though the percentage has been lower in other studies, with an average of 60%.

Here is the most recent study showing the mental health effects of IBS (which we could presumably extrapolate to SIBO and confirm with the testing discussed above) – Neuroendocrine Dysregulation in Irritable Bowel Syndrome Patients: A Pilot Study

If you are not getting anxiety symptom resolution with dietary changes, the use of targeted individual amino acid, adrenal support, addressing dysbiosis and other biochemical approaches it’s time to work with a practitioner to rule out or address SIBO as a causal factor.