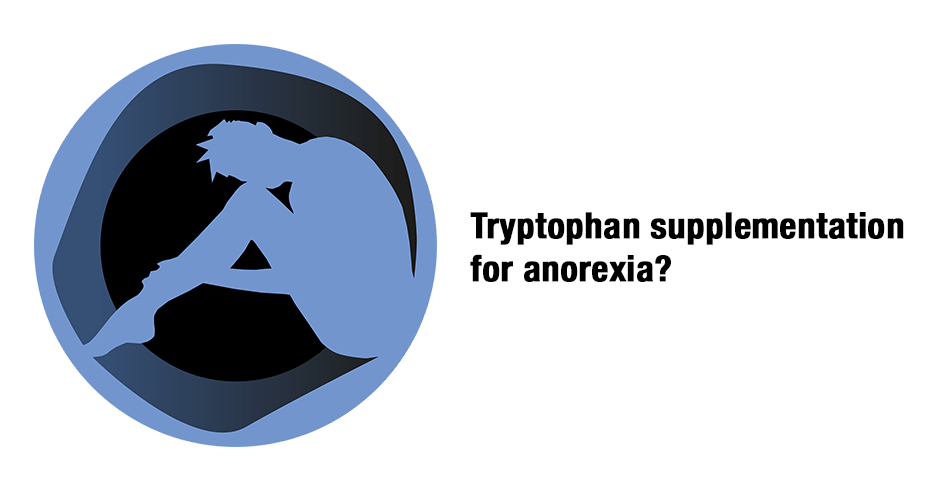 According to The National Eating Disorders Association (NEDA), eating disorders are

serious but treatable mental and physical illnesses that can affect people of all genders, ages, races, religions, ethnicities, sexual orientations, body shapes, and weights. National surveys estimate that 20 million women and 10 million men in America will have an eating disorder at some point in their lives.

While no one knows for sure what causes eating disorders, a growing consensus suggests that it is a range of biological, psychological, and sociocultural factors.

While NEDA does acknowledge that some of the causative factors may be biological, unfortunately there is no mention of nutritional psychiatry or tryptophan on the site. You’ll see this to be the case in the majority of conventional treatment centers.

The 2017 paper on tryptophan potential for anorexia

The paper, Improving therapeutics in anorexia nervosa with tryptophan, does acknowledge that the “growing body of evidence suggests that our diet is an important contributing factor in the development, management and prevention of a number of psychiatric illnesses.”

It discusses what we know about tryptophan being “the sole precursor” of serotonin, a neurotransmitter and that when used as a supplement it has therapeutic benefits when serotonin is low.

The author proposes that excessive dieting and food restriction decrease brain tryptophan and serotonin and propose the “potential importance of tryptophan supplementation in improving therapeutics in anorexia patients” (together with psychotherapy).

Given that anorexia has the “highest lethality of all psychiatric illnesses” and that there are currently “no FDA approved pharmacological treatments available” for anorexia, the urgency for implementing nutritional psychiatry approaches is high. The authors also share that the antidepressants and antipsychotics which are commonly used to treat the co-occurring anxiety, depression, OCD and psychosis are not very effective.

The author mentions a paper that used 250 mg tryptophan twice a day times a day but based on my work with individuals with anxiety, we know an individualized approach is best.  A typical starting dose of tryptophan is 500mg used once or twice a day and I use the trial approach to determine the ideal dose for each person.

Incidence of anorexia and eating disorders in general

Here are a few select anorexia and eating disorder statistics from NEDA. I find much of this alarming and in some cases surprising (like the high incidence of males who are affected):

Prevalence of anxiety and making the case for low serotonin

The prevalence of anxiety is high in those with eating disorders (which is one of the reasons for this particular blog):

In one study, after dietary treatment (called refeeding), plasma tryptophan levels normalized in patients with anorexia:

Plasma TRP normalizes during the course of refeeding, supporting the hypothesis that serotonin function is disturbed in patients with anorexia nervosa.

We also see a large number of low serotonin symptoms in those with eating disorders:

This further supports the rationale for tryptophan supplementation and is another reason for this blog. I have extensive experience in the use of tryptophan and 5-HTP and believe they should be part of all eating disorder programs.

There is one big difference in that typically we see afternoon and evening sugar and carb cravings with low serotonin-type anxiety. Whereas with anorexia, the low self-esteem, obsessive thinking and body dysmorphia (feeling shame or disgust with parts of their body or appearance) may prevent someone acting on these cravings. However, if there are sugar and carb cravings (and bingeing), this is the time they will typically occur.

Here are two recent blog posts that share case studies where tryptophan was used with success:

Anorexia and other eating disorders require a multidisciplinary team

I don’t currently work with clients with anorexia as it requires a multidisciplinary team. I did, however, work with a few clients with anorexia when I worked at Recovery Systems over 10 years ago. They had a therapist, nutritionist and doctor on their team and a nutritional approach led to more improvements than they had experienced at prior in-house eating disorder clinics where they had received psychological support only or psychology and medication. Our approach included addressing low serotonin with tryptophan or 5-HTP, addressing low zinc, addressing the gut/microbiome, low B vitamins, low omega-3 fatty acids and more (based on the unique needs of the client).

I now refer eating disorder clients to Dr. James Greenbatt, MD, an eating disorder specialist and integrative psychiatrist. He has a wonderful book on the topic: Answers to Anorexia – a Breakthrough Nutritional Treatment That is Saving Lives, with the second edition coming out soon. In the first edition he does address neurotransmitter deficiencies but we differ in our approach.  He doesn’t use individual amino acids like tryptophan or 5-HTP and prefers to use a blend of amino acids based on a blood or urinary amino acid test.

In this article, New Approaches to Treating Anorexia, Dr. Greenblatt covers the multidisciplinary aspect, current treatment options, the limited medical options and the need for targeted nutrition therapy. Although this article doesn’t address tryptophan and low serotonin, he does discuss the key role of zinc, B vitamins and omega-3 fatty acids.

If you are new to using the amino acids tryptophan/5-HTP, GABA or  tyrosine as supplements, here is the Amino Acids Mood Questionnaire from The Antianxiety Food Solution (you can see the low serotonin symptoms here) and a brief overview here, Anxiety and targeted individual amino acid supplements: a summary.

If you suspect low serotonin or low levels of any of the neurotransmitters and do not yet have my book, The Antianxiety Food Solution – How the Foods You Eat Can Help You Calm Your Anxious Mind, Improve Your Mood, and End Cravings, I highly recommend getting it and reading it before jumping in and using amino acids so you are knowledgeable. And be sure to share it with the team you or your loved one is working with.

The book doesn’t include product names (per the publisher’s request) so this blog, The Antianxiety Food Solution Amino Acid and Pyroluria Supplements, lists the amino acid products that I use with my individual clients and those in my group programs.

Have you (or a loved one) been diagnosed with anorexia or another eating disorder?

Did you see the most success with an approach that included nutritional psychiatry and serotonin support with tryptophan or 5-HTP?

What else has helped?